In early March, ELRC started the “Crisis response without language borders” initiative to support cross-border communication for helpers and refugees in the Ukraine crisis and to prevent both misunderstandings and spreading of misinformation across Europe. The plea for support, which was circulated by email, via social media and published on various websites, called for data donations of bilingual and multilingual corpora for Ukrainian to and from all EU official languages. Such data is essential to train easily accessible, free and fast automatic translation systems that can facilitate information exchange between Ukrainian and the EU official languages. 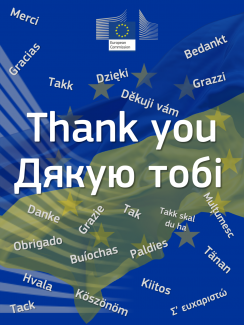 Now, two months later, it is time to thank you, the ELRC community, for your support: Within only a few days, the inbox of the ELRC team was packed with hints on data sources, offerings of free MT engines, links to Ukrainian language tools as well as messages from translators offering a helping hand. On LinkedIn alone, the call for support was shared more than 130 times, generating 5,600 views.  Overall, we were able to collect 11 multi/bi-lingual corpora, adding up to 4 million translation units (with almost 160 million words) and one monolingual data set with approximately 26 million words. All these resources will be stored on ELRC-SHARE and can be re-used for research purposes or LT development related to the Ukrainian language.

The huge demand for Ukrainian language support also becomes evident from the usage statistics of the European Commission’s machine translation system eTranslation: On 10 March, the first eTranslation engines supporting translation between Ukrainian and the EU official languages went live – and since then, almost 3 million translation requests involving Ukrainian were processed by eTranslation.