Digitalisation has fundamentally changed our professional and private lives. Some of us, however, may think that the digitisation of economy and society is moving too fast, making it hard to keep up with the technological progress. To make digital technologies accessible and understandable to everyone, the German initiative “Digital für Alle” (Digital for All) organised more than 2.000 events as part of the second edition of the national Digital Day on 18 June. The goal was to promote digital inclusion across all professions and ages and hence, many high-ranking representatives from politics, business, and civil society, supported this event, including Dorothee Baer, Minister of State for Digitalisation and Saarland’s Prime Minister Tobias Hans. The latter also highlighted the importance of digital inclusion, stating that “digital change is changing our lives ever more – it offers entirely new opportunities not only for economic success but above all for participation for all”. 1 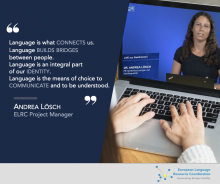 One of the sessions at the second Digital Day in Germany was dedicated to ELRC and its importance for Artificial Intelligence (AI). But how does that fit in with the topic of digital inclusion? ELRC project manager Andrea Lösch had a clear answer to that: Language is what connects us, it builds bridges between people, it is an integral part of our identity. This statement goes hand in hand with the mission of ELRC, as the initiative aims to lower language barriers and to protect all native languages – large and small – from extinction with the help of digitalisation and language technologies.

Following up on this, Josef van Genabith, Scientific Director of the Research Department “Mutlilinguality and Language Technology” at the GermanResearch Center for Artificial Intelligence (DFKI), explained why data is so important for the development of language-centric AI. He shared the example of a machine translation (MT) system, which had trouble translating the French term “advocat” into German. While the source text was referring to the fruit, the MT system translated it into “lawyer”, resulting in the rather unusual sentence “I ate a lawyer”. This error was caused because most training data came from legal or formal texts – menus or cooking recipes were hardly included in the data sets. In his interview with DFKI’s corporate spokesman Reinhard Karger, Josef van Genabith also highlighted the value of initiatives like ELRC for the future development of European language technologies: “We need to join forces in Europe. Together, we can achieve a lot!”.